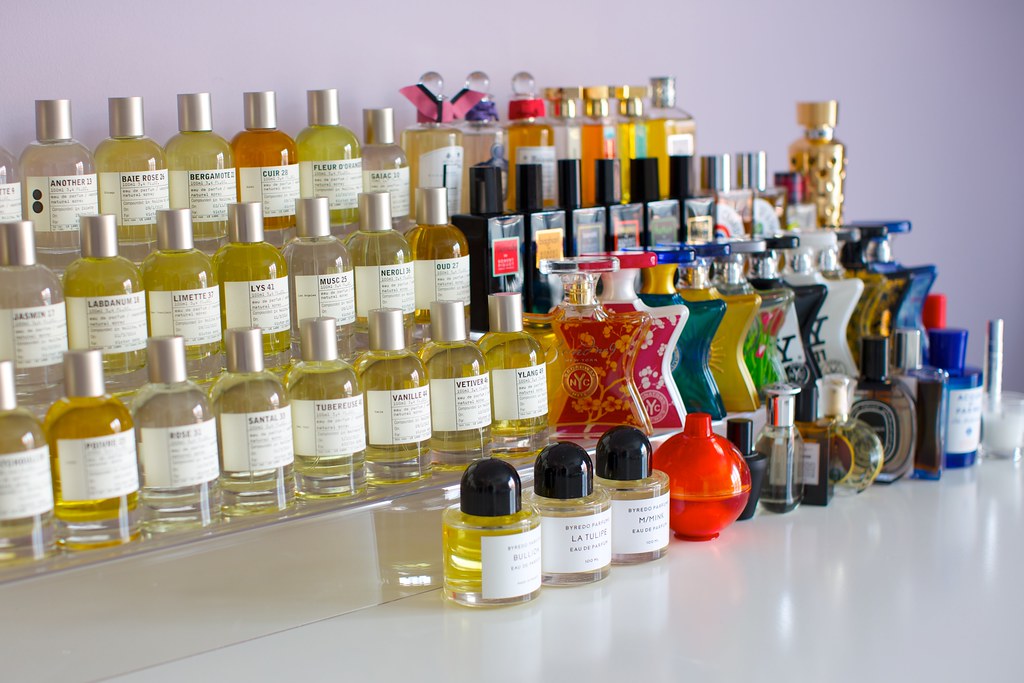 After publishing the last post, I created a new thread at Basenotes.net on the subject:

I was surprised that some didn’t seem to understand my point, even though I used an obvious example, which I want to mention here.  I don’t think claims about niche being “dead” make sense – perhaps the best way of phrasing it is that a “bifurcation” has occurred, with the well-to-do continuing to buy at high prices while many of us who are concerned with our budget scour ebay for great deals (such as when 75 ml bottles of scents by Cereus were selling for $10-15 not long ago), or try to swap in order to acquire niche bottles we think we might like.  And then there are the “niche samplers,” who may hardly ever buy a bottle, so it doesn’t really matter to them (since samples are not expensive or free in many cases).

As one reviewer of Perry Ellis Oud: Black Vanilla Absolute said on the Basenotes site:

“I won’t lie though…I’m almost embarrassed to tell people I’m wearing Perry Ellis…lol…and when I do, I wonder if they feel embarrassed that they wanted to know about a Perry Ellis scent. lmao…First Dunhill Icon and Now Perry Ellis…I wonder when Liz Claiborne will be dropping a Gem. lol…I hope these amazing releases from once overlooked brands pushes the creativity of more respectable houses that have gone the generic route.”

It seems that what’s mostly happening is that the”respectable houses” save their supposedly more niche/artistic formulations for their exclusive lines, while continuing to release uninspired/generic/”chemical” scents in their “mainstream” lines.  This has opened up an opportunity for the “lesser houses” to release “clones” of the most popular niche/exclusive scents.  Of course, well before this, plenty of “lesser houses” released “clones” of the most popular scents, though rarely were these priced very high, at least by the time most of the public saw them available for sale.  But if we think of the popularity of PEO:BVA (despite so many claims that it’s weak), the question I asked in the last post seems crucial:  in this case we could phrase it as, how many vanilla and alcoholic beverage type scents does one person want?  Now at $5 per 50 or 100 ml, most of us can become at least temporary hoarders, at some point deciding to give some away, sell them in lots on ebay or Craigslist, etc., but at $100-200 per bottle  bottle, most of us might back off and reassess what we are doing!

When there was a huge amount of hype for a small number of niche scents at sites like Basenotes, most of us were not concerned about cost (which in some cases was considerably less several years ago), and some bought “splits,” but now, after many of us have acquired bottles of these scents, one wonders how there can be so many niche and exclusive bottles released, year after year, without a significant change to the process.  Perhaps those hundreds of Cereus bottles on ebay at “drug store dreck” prices are all we needed to know.  And one key point of mine here is that people like Michael Edwards are probably never going to bring up such facts, as these would contradict the notion of specialness; how can someone who speaks glowingly about how great it would be for a niche house to release a “modernized” Old Spice then talk about how if you wait you might be able to get a bottle that now sells for $150 or so for around $15?

Such people speak as if the prices are irrelevant (did he even mention prices in that lecture I cited in the last post?).  But if I already have a dozen leather scents, of various types, why wouldn’t I wait to see if I can get it for 10% of its current retail prices?  Why should I be impetuous (don’t the English tend to really dislike that quality)?  And if he is only speaking to those who are wealthy, why not bring up this point?  Why not say, I realize how expensive these olfactory concoctions have become, so for those of you who want to save a bit for retirement rather than hoarding these bottles, I suggest buying samples and obtaining as many free samples as is reasonably possible?  Is it because that will then shine a light on the prices?  Has niche become like the restaurant that doesn’t list prices on the menus?  I certainly haven’t seen evidence that the most expensive scents are worth anywhere near the retail prices, relative to what else is available (vintage and “niche clones” like PEO:BVA in particular), but again I don’t ever expect people like Mr. Edwards to address this!

Below I have copied and pasted some points I made on that Basenotes thread I created on this topic:

“This post is not meant to be a complaint, because I have been able to obtain more than a few niche bottles through swapping. Rather, I am arguing that this is in some ways similar to ‘fine art.’ Most people don’t own any and don’t even go to see it at museums. It’s been called ‘welfare for the wealthy,’ and just like with fragrances if you are interested and not rich you can still “get in on the game” on a lower level than your super-rich fellow humans. But when we hear people like Edwards speak, I think we should keep in mind the realities that exist for most of us, and how he never seems to address those points.”

“I think the ‘talking past each other’ issue comes up because people become entrenched in a position during a ‘debate’ (formal or informal) and don’t clarity/refine what they are trying to communicate. In this case, let me say that I wouldn’t be surprised if more niche and exclusive bottles are produced in 2016 than had been in 2015, and then more in 2017 than in 2016. That’s not my point. I wouldn’t be surprised if wealthy individuals continue or start to essentially warehouse niche bottles (as our hednic apparently does!), but what about the rest of what one might call informed fragrance buyers? Perhaps 20 years ago, golf had become very popular. I was introduced to the game perhaps 10 years before that, and was surprised at how those who had no experience with the game would go out and buy the most expensive clubs they could find, and I’m sure some of them are still playing today. But most seem to have come and gone rather quickly, and there was at least one local course that was built during that time and then later bulldozed in favor of a condominium community.

“The ‘niche samplers’ may have been the ‘canaries in the coal mine’ in this context. They came, they sniffed, they experienced disappointment, then most left, it seems. Yes, as I already said above, most of us can buy a bunch of samples and then choose perhaps one or two bottles to buy each year, if not more, but that is not what the experts are saying. They are acting like dozens if not hundreds are worthy of purchase as full bottles, and that is not realistic, other than for the wealthy. And then add to that the number of niche/exclusive bottles being put up on retail shelves each year versus how many were back in the golden age of the niche samplers! Sure, this situation may continue for quite some time, but my guess is we will be seeing more niche bottles selling for what those Cereus ones recently sold for on ebay, and that is not something I think these experts are ever going to mention. Why? Isn’t it likely that they don’t want to scare off their wealthy ‘followers’/fans? Nobody wants to be the victim of an Emperor’s New Clothes situation, and isn’t that how many will feel if they start to see a bottle they paid $150 for selling for less than $15 total on ebay?”

On that BN thread, someone commented:

“What we thought of as niche is being drowned by a lot of ‘me too’ scents trying to cash in on the lux market, but I think there are still great and novel scents in among the dross. With the sheer volume of scents, both designer and niche, it can’t be helped that most are crap, but there’s still good stuff going on in there.”

And my point would be that you won’t find many “experts” saying this sort of thing (Luca Turin may be an exception in this context)!  Moreover, as to the claim that I am suggesting that niche is going to “die” soon, I said this:

“It’s certainly not ‘dead,’ especially with the wealthy! And more people might be brought in for a while, at least, but I think what I perceived to be the ‘niche sampler’ disappointment phenomenon is also going to grow. But given the human sense of smell, the ‘quality’ of some very cheap scents, the number of niche/exclusive bottles on the market, the excess sometimes being sold for a pittance on ebay, and the hype and glowing reviews for so many new niche releases, I’m questioning the fad qualities. I’m guessing one can still buy a ‘pet rock’ these days, but how many people do?”

Over at the NST blog there was a recent post about the growth of niche, with one person chiming in with a similar sentiment:

“Although i think that the problem is not exactly the staggering number of launches. It’s a system of distribution and consumer experience that doesn’t fit it anymore. You have difficulty filtering from those volume of fragrances which ones suits you better. And this creates a stressful situation in my opinion…”

“…I’m more critical of ‘experts’ who talk as if us non-wealthy can afford to buy a bunch of niche bottles at retail prices. And they never seem to talk about or review the ‘cheapos’ that are similar to popular niche or exclusive scents! Anyone want to guess why that is? Not long ago you could get 75 ml new bottles of several Cereus scents for $10-15 on ebay (I bought a few), total! That may be a mere sliver of what we will soon see, but I guess we should be glad (those of us with a little patience, and some time to head over to ebay once in a while). To me, and it seems to many others, the notion of niche as special (and warranting high prices) is eroding, the ‘cheapo clones’ only being one reason, IMO.”